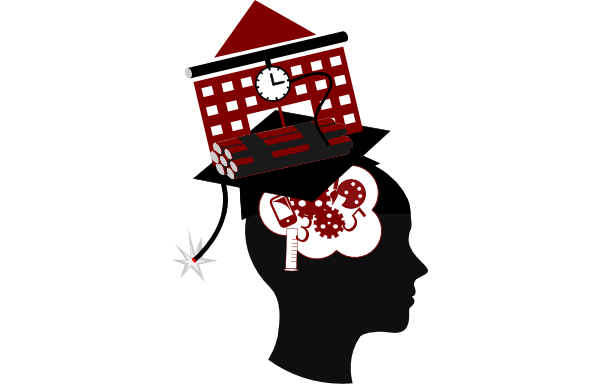 You’ve researched the possibilities, and worked hours on a solution. After singeing your fingers soldering wires together and assembling parts that you worked extra chores to purchase, you finally finish assembling and testing your masterpiece. It works! It really works, and YOU made it. You want to show it off to someone who will appreciate it, so you delicately pack it up and take it in to school with you.

Walking into school you’re jittery with excitement. This will be the moment when your new teacher sees how serious you are and you find your niche among your classmates. You carefully place your invention in your locker as you gather your books for your first few classes. You painstakingly carry your invention to class, tip toeing over couples making out, jocks wrestling and people walking obliviously against the flow of traffic.

You get there, SO EXCITED to show your teacher and your classmates what you’ve made. Once the other students see it, they’ll be so excited about what you can do, that they’ll want to discuss it with you. It’s been hard to be the new kid at a new school as a freshman.

You fidget all through roll call. As soon as the teacher is done, you shoot up your hand, unable to wait one more moment. “I have something I’d like to show you, please.”

This is where it all goes wrong. So terribly, terribly wrong.

You pull your invention out of it’s casing, and begin to describe it, but before you can get into any depth, two students gasp, and others exchange looks. The teacher frowns and clears a throat full of discomfort. “What exactly do you have there?”

It’s unclear if this is a statement or a question. Someone giggles a nervous laugh. This is not at all the way that you thought this would go. What is happening?

You get even more confused when a few minutes later a police office stands in front of you.

“What do you have here?”

“Some people are scared that it might be more than a clock.”

“More than a clock?”

“It’s a clock. I made it. I wanted to show my teacher and the other students in my class.”

The next thing you know you’re being hauled out of school in handcuffs. In horror, your sister takes a picture and texts it to your parents. This is your only hope, but you still can’t process what is happening.

Why am I being fingerprinted? Why am I getting suspended?

Bizarre, isn’t it? Unfortunately, this drama is based on the real story of a real teen.

It happened Monday. Ahmed Mohamed made a clock. When we was arrested for bringing it to school, he showed us all what time it is.

You can be brave.

Makers are the future. They need to be understood and encouraged, not feared. One thing that has gotten buried in this story is that the student’s engineering teacher was impressed, but advised the student not to show the clock to other teachers, presumably because they wouldn’t understand it and would react poorly. It’s fair to say that the engineering teacher was right. Though the teacher who was afraid the clock might be a bomb and the administrator(s) who called in the police were probably acting out of an “it’s better safe then sorry” mentality, the bottom line problem is that they didn’t understand that what they were seeing was safe, or even which colleagues to ask for an expert opinion, say like an engineering teacher…

You can question the status quo.

We are at a critical point in education. The point of public schooling used to be to prepare students for static jobs, whether in a factory or an office. These jobs required very specific, domain level knowledge that could be passed down from the sage on the stage, memorized and regurgitated. The reality is that jobs are not like that now. No job requires a person to be knowledgeable in math and only math or English and only English. Schools have become an artificial construct. If the point of school is to prepare students for the “real world” including college and careers, we need to rethink the educational hierarchy.

At the dawn of the industrial revolution, and probably before, the hierarchy looked something like this in most if not all western schools: 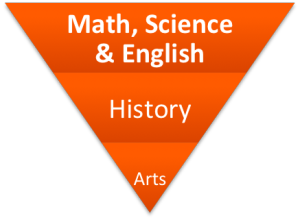 This model reflected the needs of industrial barons and a people in a space race. Over time, however the needs have shifted, and pressures on the education system have shifted the model to something like this: 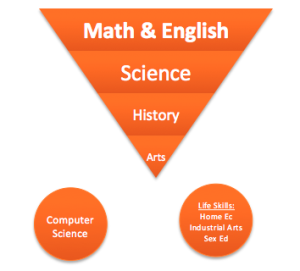 Schools are trying hard trying to do everything, but as a whole, they’re still doing it in a framework that is ill suited to the needs of modern students and future workers. We must rethink not only the hierarchy, but also the subject silos and our education methods. I propose three new core subjects and a new model.

In a society that is in constant communication with devices, 24-hour news, streaming media the ability to access, evaluate, analyze, use and contribute information is key to a thriving democracy. Students can write songs, create videos, publish research and connect ideas.

To make, um, let’s say a CLOCK, a student would research the history of clocks, mechanical engineering, electrical engineering, coding options and fabrication methods. To make a theatrical set, a student would need to understand the context of it’s role in the play, research historical accuracy, learn to use power tools safely, take accurate measurements and work with ratios and produce 3d effects with paint.

In his now famous Ted Talk from 2006, Sir Ken Robinson wondered why physical subjects, such as dance are relegated to the bottom of the educational hierarchy even though we all have bodies. Since then, we’ve also found ourselves in a national health crisis with childhood obesity on the rise, and an ever-increasing need for health care professionals. In fact, seven of the ten fastest growing jobs according to the U.S. Department of Labor are in the health and wellness field. Imagine a class in which students learned about their bodies, how they work, and how to use and care for them. We’ve also been in a bit of a financial crisis. Instead of making everyone take advanced math classes that, truthfully, most won’t ever use, perhaps we should focus on personal economics and global finance, which affects everyone. Some students would still study higher-level math, just as some students would study higher-level music.

Let us create a new structure for learning, one that puts the student at the center. 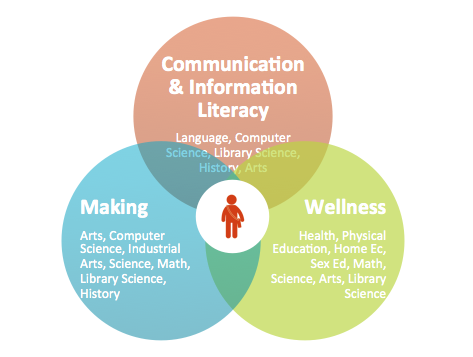 If we are to be focused on the needs of students and preparing them for the world they’re facing, we as educators need to break tradition, step out of our comfort zones, and work together in a new structure.

Yes, I know that this model would require a complete shift in the school days, with teams of teachers working with groups in block schedules, but we need to make a fresh start. We have already pulled the foundation out from under schools and expected them to stand. This isn’t a renovation project. It is time to rebuild it, and rebuild it in a way that makes sense. Our students are counting on us.

While I agree that it’s important to evaluate student progress and to evaluate teacher performance, standardized tests do neither. No student is “standard.” Teaching to the average teaches to no one, because there is no average student. There are some great articles about this, but Harvard professor Todd Rose gives a great overview. If we really want to evaluate how much and what students are learning, how about we see what they can do? Talk with students about their science fair projects, go to see robotics teams in action, watch the plays that students have written and performed. If we shift our focus to what individual students can do, instead of how they measure up to an imaginary average student, we can make school a launching pad for futures beyond our wildest expectations, instead of a training ground for a world that doesn’t exist.

It’s time to stop living in the shadow of the Industrial Revolution, and instead forge an Education Revolution.