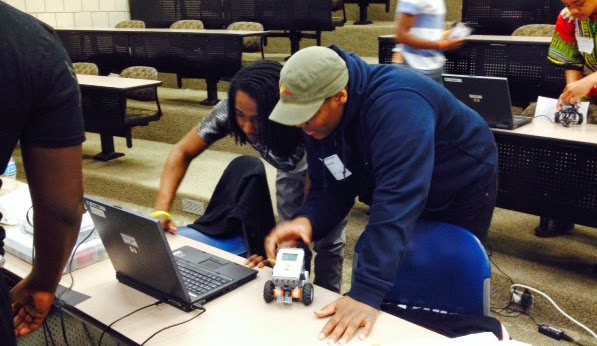 I’m exhausted.  After working all day Friday, on my day off I woke up early to drive downtown, get a parking ticket while I figured out where I was supposed to park, haul about a 100 pounds of tech equipment from one end of Cleveland State to the other, spend 2 hours setting up and taping down cords, run around the classroom for 4 hours teaching, then haul it back away.

Why do I do these things to myself?

Well, for starters, because someone asked.

About 3 weeks ago an organizer of the 2nd Annual Boys to Men Summit called up. Her son had enjoyed participating in robotics at the library, and she wanted to get these young men involved.  These young men, ages 10-17, were voluntarily giving up their Saturday to come and enrich themselves. On the day of the event, however, it quickly became apparent that some of these young men were not so voluntarily participating. Or at least, that’s what their slouched, disinterested body language implied.

I found myself having a grumpy old adult moment, wanting to wag my finger and admonish the students for not being grateful for my hard work and sacrifice, let alone that of all the hard working adults who had volunteered to organize this event.  My inner voice screamed, “Do you know what I had to go through to bring all this stuff here!?”

But the thing is, they didn’t. And why should they really care?  No one asked them if they wanted to come to the whole event, or even which sessions they wanted to attend. I expect that many of them were shamed into coming rather than celebrated for making a good choice.  Focusing on forcing gratitude from individuals who are rarely recipients of gratitude is a folly that should seem evident, but, unfortunately, is a scene that is repeated over and over again between adults and teens.

I’ve been providing consulting to a library board that is working toward finding positive ways to engage teens. Recently, a renovation of the library led to a creation of a teen space. Unfortunately, someone (of course, not necessarily a teen since it wasn’t witnessed) vandalized some of the furniture. Many of the staff entered into the classic gratitude folly. “See what happens? We spent all this money and the teens aren’t even grateful enough to respect the space!”

It’s a perfectly natural feeling.  It’s the same feeling that I expect mothers of young children have daily, when, sleep deprived, sticky haired and still adapting to the changes that birthing a baby has brought to their bodies, they stifle the urge to scream back at their toddlers who wail about the cruelty of having to take the nap that their moms desperately want themselves.

Here’s the thing.  We do hold back, usually, with little ones.  Why?  Because we know that they don’t know better.  We know that we have to be the adults.  We know that they have very little control over their lives, and that must be particularly frustrating when their toddler brains are hard wired to push them to constantly test boundaries.

With teens it’s somehow harder.  Like toddlers, their brains are hard wired to test as part of the brain’s transition from childhood brain to adult brain. Like toddlers, they have limited limb coordination, sometimes smell, and often react to the lack of control over their own lives with tantrums.  Maybe it’s because they’re chronologically closer to adults, or because they’re in bigger bodies, or, because being around teenagers reminds many of us of our own, often not so pleasant, teenage years and experiences, but when faced with sullen teenagers, most adults will revert to curmudgeon mode.  This rarely returns a good result.

Perhaps it would help us to think of teens as hidden toddlers, like the little alien inside the mechanical body in the first Men in Black movie. The same strategies work then. If faced with unpleasant behavior from the toddler/teen, we model the pleasant behavior that we wish to receive in return, we redirect when needed, avoid engaging in argument, and, perhaps most importantly, we remain confident, knowing that our fully formed adult brains and numerous life experiences give us the strength to be the leaders needed in any situation.

The point of the Boys 2 Men Summit was not, in fact, to celebrate my sacrifices and hard work, but instead to introduce the young men to positive activities and light the spark of learning.  After an internal deep breath I redirected my focus. Call me stubborn, but I was not about to let teen angst or adult narcissism get in the way of us having some fun with robots.  I had, after all, put in a great deal of effort to get them there…

So I ignored the sticks and stones looks and got to work talking with, and not to, the students. Once we worked together to problem solve and successfully run the first program on their robots, we were up and running. In every class that day, within the first 10 minutes, 90% of the students were hooked. Of course, it helps to have a lesson plan design that calls for creativity and critical thinking, and, quite frankly, robots are about the coolest redirect option ever.  Who doesn’t want to play with a robot?

But, even given that, in each class there was at least one student who never allowed himself to display interest, happiness or joy. Note the word display in the previous sentence. There are many reasons why a person would not advertise positive feelings, particularly when surrounded by unknown males, many of whom come from tough neighborhoods. Our job as adult leaders is to focus on the goal and encourage appropriate behaviors. Using clean language, following the class rules, and doing the class activities were the  required behaviors. Smiling was not a required behavior, but it was desired. It’s unlikely I would be rewarded with a smile if I returned surliness for surliness. Like the poster my mom hung in my room as a little girl said, “We must offer our hand if we are to touch another’s heart.”

Still, like toddlers, clear and consistent boundaries are key. It’s not only okay to address problem behaviors, it’s vital. Likewise is demonstrating appropriate sharing of feelings.  For instance, “I’m going to ask you to take your headphones out for our time together because when you wear them I don’t feel like we can communicate as well.” Calm, confident I statements do the trick more often than not.

All of these things are not new to me.  I’ve been working with teens for 15 years! I’m an unabashed teen advocate, who truly loves this age group, yet this is not the first time, nor will it be the last time that I’ve had to remind myself of my best practices or tell myself to woman up and be the adult. Teens are a royal mess. There are so many factors trying to screw them up from hormones, brain development, negative peer influences, unrealistic expectations, future pressures, and on and on. Unfortunately, around teens, adults can become a bit of a mess too, focusing more on our own insecurities than the teens we’re meant to be strengthening. We shouldn’t expect perfection from ourselves anymore than we should expect it from teens.

What we should do is remind ourselves, in our weak moments, that we are not here to be admired, thanked or celebrated; we are here to serve a larger purpose, the successful transitioning of children into resilient adults. In the words of Dr. King, “Everybody can be great, because anybody can serve.” The trick is to focus on the service and the greatness of the cause and the greatness of the kids rather than the greatness of the adult leader. Serving teens requires a unique blend of confidence and humility mixed with an ample dose of empathy. Sometimes I won’t get the recipe just right, but I’m going to keep on cooking.